YOFC: Striving for Excellence with Innovation in Fibre and Cable Industry

What kind of enterprise is YOFC in essence? Why is it so favored by market? Founded in 1988, YOFC was co-created by the former Ministry of Posts and Telecommunications, Wuhan Municipality, and Royal Dutch Philips Electronics Ltd. Over the past 30 years, YOFC has grown from a local fibre joint venture in Wuhan into a leading industrial player ranking the first worldwide in terms of the capacity of optical fibre perform, fibre, and cable. What's more, it has established many overseas factories in Southeast Asia, South Africa, and other regions. Thanks to strong technical innovation capability, YOFC has blazed a distinctive development path of introduction, digestion, assimilation, and re-innovation, thus shifting from "being a follower of technology" to "being an exporter of innovation" in global fibre and cable market.

Being Committed to Innovation

On March 5, 1988, Wuhan Optical Communication Technology Co., Ltd., Wuhan Trust and Investment Co., Ltd., and Royal Dutch Philips Electronics Ltd. signed joint venture contract and articles of association in Wuhan, marking the founding of YOFC. As the first fibre and cable joint venture in China, since its inception, YOFC has shouldered the major responsibility of leading the R&D of China's fibre and cable technology, and powering the sound, fast industrial development.

Endowed with innovation-oriented genes, YOFC has been committed to technical innovation. Over the past 30 years, while making sustained efforts in enhancing capacity and management, YOFC has been persistent in pushing for innovation. That can be testified by the Second Class National Science and Technology Progress Award reaped by YOFC for two times.

In 2005, YOFC won the Second Class National Science and Technology Progress Award for its project "technical research in manufacturing NZDS single-mode fibre and scale production by using PCVD technology", which was the one and only project that had received a second class award of ministerial and provincial-level and national second class award back then. Such an honor meant recognition and encouragement for YOFC. Meanwhile, the honor enabled YOFC to emerge as a new role model in the industry to lead industrial technical innovation. Yet, the success of the project should be attributed to the strong commitment of YOFC in technical innovation.

When China's communications industry started to gear up in the end of the 1990s, the country was still backward in technical strength. When it comes to fibre and cable technology, which serves as backbone of network, the industry was monopolized by foreign manufacturers, and China had to import fibre and cable products to a large degree. In 1996, Lucent Technologies and Corning Incorporated of the US produced G.655 single-mode fibre, which can meet the needs of transmission with large capacity and long distance. Such a cutting-edge product was embraced by the market. By comparison, no fibre and cable enterprise had the capability of developing and producing G.655 fibre in China. That meant that if China chose to use G.655 fibre in its communication network construction, it had to rely on import and gave the pricing power to foreign manufacturers.

Facing such a dilemma, YOFC led its peers to engage in G.655 R&D and power the development of China's fibre and cable industry. With such an entrepreneurial spirit and strong faith in independent innovation, YOFC developed the first generation G.655 product in a short span of several months, becoming the first Chinese company mastering such a technology and thus breaking foreign technical monopoly.

The successful development of G.655 fibre represented a major breakthrough of YOFC in independent R&D and showed the strength of Chinese enterprises in global arena. Then the Second Class National Science and Technology Progress Award won by the project "new fibre manufacturing technology and industrialization" in 2017, which was co-developed by YOFC and China Unicom, meant that China's fibre and cable enterprises had joined the club of global leading players in the R&D of new fibre technology.

In recent years, with the rise of cloud computing, big data, AI, IoT, and other technologies, as well as the popularization of HD videos and other application, network flow has rocketed. Therefore, the industry is exploring its way in how to build a new generation of optical transmission network that can meet the needs of 5G era and beyond. Based on judgment on the trend and its deep understanding of fibre and cable technology, YOFC has made active efforts to push for the project "new fibre manufacturing technology and industrialization". In order to cater to the urgent needs of new-type optical fibre for communication in access network and next-generation optical transmission network, YOFC has engaged in the R&D of a series of key technologies, such as large-size optical fibre preform, and the manufacturing of new bending insensitive fibre with ultra-low loss and large effective area. Therefore, it came up with a batch of world-leading techniques and products, produced large-size optical fibre preform that outperforms its peers, as well as G.657 series of bending insensitive fibre, G.654 fibre with ultra-low loss, and other products leading the world in terms of performance indicators.

The successful development of G.655 single-mode fibre and G.654 fibre with ultra-low loss and large effective area fully showed the technical innovation capability of YOFC. Yet all those are only part of technical innovations of YOFC, and the company cherishes greater ambition for the future. "Currently, YOFC is a technology leader in G.654 new fibre and other single projects. Yet we have never settled for that, since a real industrial leader needs to lead the way in a more comprehensive, proactive, and systemic manner." That was how Zhuang Dan, Executive Director and President of YOFC, described the vision of YOFC.

Being a Real Industrial Leader

"As an enterprise born with historical mission, YOFC has reaped series of new technical innovations, which belong to YOFC, as well as the whole industry." That is a viewpoint stressed by Zhuang Dan on many occasions. Actually, that is also the reason behind the fact that, YOFC is always ready to share its technologies in a proactive way despite fierce market competition. Zhuang Dan has always believed that, YOFC cherishes the faith to power the technical progress and prosperity of the whole industry with its own innovation capability, so as to help China's fibre and cable industry get rid of foreign monopoly, which is also a sense of responsibility and mission.

Guided by such a mission and vision, YOFC has always been committed to the formulation of domestic and international fibre and cable standards. In today's world, no industry can develop without due standards. Therefore, the right of speech in standards directly represents the strength of an enterprise and even the whole industry. At present, experts of YOFC act as editors and reporters in ITU-T, IEC, CCSA, and other standard organizations. What's more, YOFC has undertaken many meetings of domestic and foreign standard organizations. YOFC has led or participated in the drafting of 125 standards of various kinds, including 13 international ones, and 65 national and industrial ones.

Besides, YOFC has invested more in the R&D of cutting-edge fibre and cable technologies, and established YOFC State Key Laboratory of Optical Fibre and Cable Manufacturing Technology (hereinafter referred to as "YOFC State Key Laboratory"). Approved by the Ministry of Science and Technology in December 2010, the YOFC State Key Laboratory was built under the administration of the Science and Technology Department of Hubei Province and based on the technical strength of YOFC. It is among the second batch of state key laboratories of enterprises in China. YOFC has also undertaken 20-plus national major science and technology research projects, including 973 Program, 863 Program, Torch Program, National Science and Technology Support Program, and others. For example, in the major special research project "Development and application of advanced optical fibre sensor system" which passed technical acceptance in October 2016, YOFC State Key Laboratory made breakthroughs in many basic components and techniques, such as specialty optical fibre, broadband optical source, single frequency fibre laser, fibre optic gyroscope, and high-speed high-precision interrogator. In this way, YOFC overcame technical bottlenecks in the engineering and industrialized development of optical fibre sensing system.

Powered by the ever-improved technical innovation capability, in recent years, YOFC has moved faster in going global, and viewed establishing international presence as an important corporate strategy. Thanks to many years of market cultivating and development, YOFC now enjoys relatively strong brand influence and stable customer relations in some countries and regions. Currently, YOFC has established many overseas sales offices and is well-poised to provide fibre and cable products and services for many countries and regions.

During the past 30 years, the development of China's fibre and cable industry basically followed the approach "trading technology with market". Today, YOFC is shifting from "introducing technology" to "being an exporter of innovation", and bringing new technologies and products to overseas market. At this point, YOFC has founded four joint ventures in Myanmar, Indonesia, and South Africa. It is also working to build overseas offices and copy its successful business model in overseas market, and drive local communications industry with innovative technology.

The 30 years of development of YOFC can be summarized as "striving for excellence with innovation in fibre and cable industry". Starting its business in fibre and cable, YOFC focuses on the R&D of cutting-edge technology and innovative products in optical communication, works to secure deep roots in the industrial chain, and makes great efforts in expanding global presence. Looking into the future, the whole society is entering a better world of "Internet of Everything", where internet will play a more important role in production and life. As the foundation of internet, fibre and cable will embrace more development opportunities. We are optimistic that YOFC, a company following a quality development path, will use its capital strength in A-share and H-share markets and powerful innovation capability, and scale new heights in the digital economy. 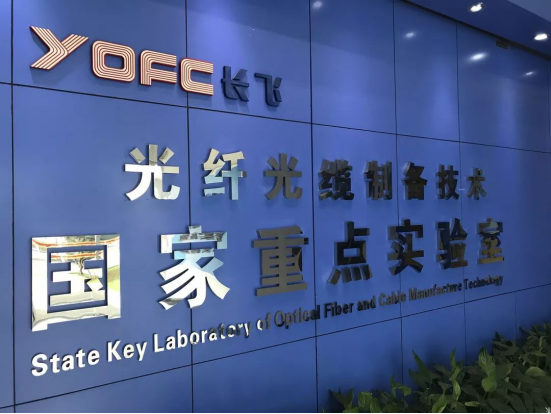 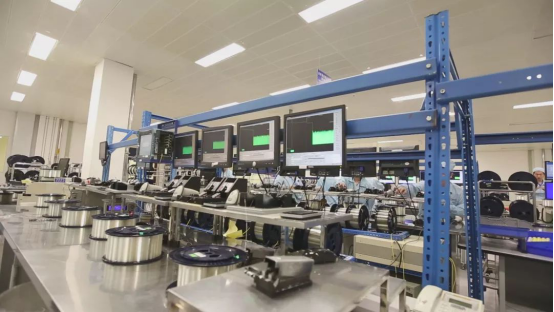 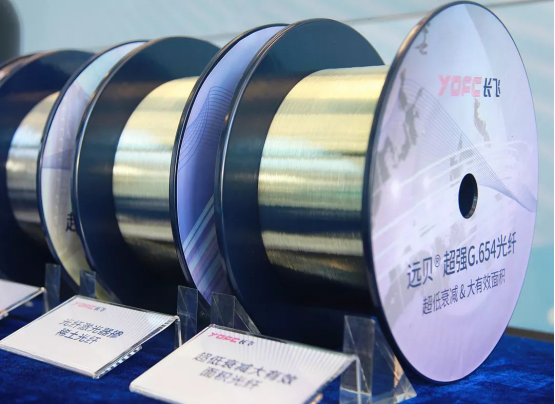 YOFC took the led to produce G.654 fibre with ultra-low loss and large effective area in China, with world-leading performance.